Jem and the Holograms is a 2015 American musical fantasy drama film co-produced and directed by Jon M. Chu, written by Ryan Landels, and starring Aubrey Peeples as the title character, Stefanie Scott, Hayley Kiyoko, Aurora Perrineau, Ryan Guzman, Molly Ringwald, and Juliette Lewis. Borrowing elements from the 1980s animated television series Jem by Christy Marx, the film was produced by Hasbro Studios and Blumhouse Productions. Chu's interest in developing a film adaptation of Jem is based on having grown up watching the original animated series with his sisters. He had attempted to make the film 11 years earlier, but was rejected by Universal due to the cost.

Kesha appeared in the mid-credits scene as Pizzazz, the leader of Jem and the Holograms' rival band, The Misfits. Erica informs her that Rio is dating Jem, and then with an evil smile says they're going to get back at Jem.

Teenage songwriter Jerrica Benton and her younger sister Kimber live with their Aunt Bailey and two foster sisters, Aja and Shana. The four girls frequently videotape themselves playing music and wearing colorful 80's outfits just for fun, but Jerrica is too shy to sing on camera. Jerrica learns one day that due to Aunt Bailey's financial problems their house will be auctioned. She vents her emotions by recording a song with the video camera Kimber uses to post blogs. She disguises herself by calling herself Jem, her deceased father's nickname for her.

She is interrupted just before deleting the video and an Internet-obsessed Kimber posts it onto YouTube. The video attracts millions of views in a single day. Jerrica is offered a record deal by Starlight Productions and travels to LA with her sisters. They meet music producer Erica Raymond and her son Rio. Erica is polite and courteous with the four girls but shows particular interest in Jerrica, who she sees as a potential superstar.

The girls settle down in LA and discuss their next move. They've brought along a small robot called 51N3RG.Y (pronounced synergy) built by the Benton sisters' deceased father, Emmett. The robot suddenly activates itself and leads them on a scavenger hunt. Each clue represents something Jerrica did or wanted to do with her father. The objective is to find several missing pieces designed to fit into the robot so that it can be fully activated. The girls find the first piece in the Santa Monica Pier. They find the second clue in a guitar once owned by Jerrica's father when, by coincidence, the band plays a concert.

Rio and Jerrica begin to develop feelings for each other, much to Erica's dismay. Erica signs Rio off to another singer in an attempt to keep him away from Jerrica. Aunt Bailey tells Jerrica via FaceTime that their house is going for auction in a few days. Desperate to save the home, Jerrica asks Erica for an advance. Erica says she'll happily oblige, but only if Jerrica agrees to leave her sisters and start a solo contract. Jerrica relents, believing she is doing it for the family. Her sisters discover the truth about the contract, denounce her for leaving them out of the deal, and leave. After a dull solo performance, Jerrica becomes depressed over her mistake and goes to visit the LA house where she used to live with Kimber and her father.

Her sisters arrive to visit her at the old house and make amends. They vow to help her finish the scavenger hunt and Rio goes along too. Jerrica realizes that the last piece is the earrings her dad told her to wear, but Erica made her take them off when she first went to Starlight. The earrings are now stored in Erica's office. Rio and the girls break into Starlight headquarters, almost getting caught by Erica, but succeed. The reward for finishing the hunt is a final hologram message from Jerrica and Kimber's father. They also discover Rio's late father's will, which gives him a majority of shares in Starlight and effectively puts him in control of the company.

At the end of the movie, Rio and Jem kiss, Erica is fired, the house is safe, and everyone is happy. Jem and her sisters play their final concert together. Rio chats with a woman called Lindsey Pierce (Jem creator Christy Marx in a cameo role) at the concert. She offers to give the band the cover of Rolling Stone, and asks Rio what to call the band. He suggests "Jem and the Holograms." Lindsey says it's a great name.

In a mid-credits scene, Erica, now terminated from Starlight, arrives in a seedy junkyard, where she attempts to recruit a group of punkish young women into a band to rival the Holograms. They decline, saying that Erica dropped them the first time they were signed with Starlight. They change their minds when the leader, Pizzazz (Kesha), discovers that Rio is dating Jem, and take Erica inside. The graffiti on the side of their trailer reveals their name as the Misfits. 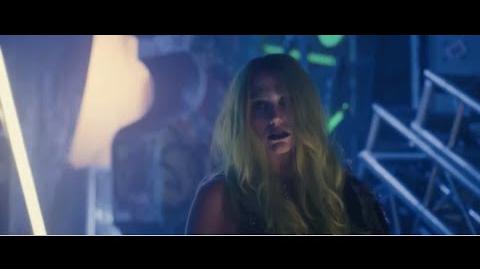 Kesha as Pizzazz in Jem and The Holograms (Full Clip)

Retrieved from "https://kesha.fandom.com/wiki/Jem_and_the_Holograms?oldid=19353"
Community content is available under CC-BY-SA unless otherwise noted.