Lip$ha was the planned collaborative studio album by The Flaming Lips and Ke$ha, originally due to be released sometime in 2014. The name is a portmanteau of "Lips" and "Ke$ha".

The Flaming Lips frontman, Wayne Coyne made the announcement during an Ask Me Anything session on Reddit and offered plenty of praise for Ke$ha, elaborated on projects previously, including tracks from her recent album Warrior and tracks from their 2012 release, The Flaming Lips and Heady Fwends.

Wayne Coyne from The Flaming Lips first expressed interest in working with Ke$ha in January 2012. Coyne said he knew she was a fan of his work and felt that a collaboration between the two would be a "perfect match." The duo reportedly collaborated at the Lips' studio in January 2012. A track called "2012 (You Must Be Upgraded)" was created during a February recording session in Nashville and was released on the Lips' album, The Flaming Lips and Heady Fwends.

In March 2012, Coyne told Rolling Stone that he was in the development stages of talking to Ke$ha about working with her on her new material. Along with "2012", Wayne and Ke$ha's first collaboration created three other songs, all of which belonged to Ke$ha, but were due to be released on Lip$ha. Coyne was later asked if he still intended to contribute to her album he responded, stating: "I'm trying to. I think we're getting together right before Easter. We've already done three songs-- they're hers". According to Twitter messages by Coyne, recording between the duo continued in April 2012 and a track that discussed "Futuristic Sex Toys" Coyne and Ke$ha revealed via Twitter that a song titled "You Control My Heart" was created. Coyne announced that he was in the process of mixing the song. "Past Lives", a track described by Coyne as a "stellar track" was confirmed to be another collaboration between the pair, but this was included on Warrior.

Altogether, Coyne and Ke$ha's collaboration yielded between six and seven tracks in 2012, and some of these are due on Lip$ha. Until April 2013, there was little discussion or rumor of an album yielding between The Flaming Lips and Ke$ha. It was only on April 4, 2013, that the Lips' lead singer Wayne Coyne announced that they would be releasing an album together entitled Lip$ha in an interview. In the interview, they discussed working with Ke$ha, where Coyne replied, "She is a blast on all levels. She's funny, she's humble. She's badass. She's everything. She's awesome. We're actually already working on an album with her. It's called Lip$ha.".

On May 4, 2014, Coyne tweeted that the album was going to be released after Kesha worked out her situation with Dr. Luke.

Kesha talked about the album during an interview for Front Row Live Entertainment, saying: 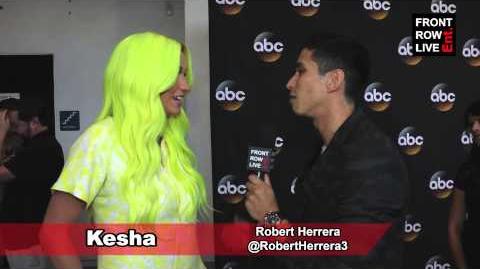 Kesha dishes on Mr. Peeps, Yeast Infection, Lipsha and Donald Trump in this game of True or False!
Retrieved from "https://kesha.fandom.com/wiki/Lip$ha?oldid=22770"
Community content is available under CC-BY-SA unless otherwise noted.