The North American Tour 2013 is a co-headlining concert tour by Ke$ha, in support of her sophomore studio album, Warrior and Pitbull, in support of his seventh studio album, Global Warming. The tour is commonly misconcepted as the Warrior Tour. The tour visited North America. The tour kicked off in Boston, Massachusetts on May 23, 2013 at the Comcast Center and ended in Tampa, Florida on June 28, 2013 at the BleauLive at Fontainebleau. With the exception of June 8, 2013 and June 29, 2013, was co-headlined with Pitbull. A planned five-city Australian leg was also going to be co-headlined with Pitbull, but was cancelled two weeks before due to poor ticket sales.

In late March, Ke$ha and American rapper Pitbull announced that they will tour North America together on their 2013 North American Tour. The joint tour was officially announced on March 22, 2013, but the two hinted at the tour on March 21, 2013 via Twitter. Shortly after tickets were available for the duo's summer tour, Ke$ha announced a separate tour by the name of the Warrior Tour that would visit Europe and other places she did not visit with Pitbull. A couple weeks later, on May 13, 2013, North American dates were added to the tour. Ke$ha announced the pre-sale password for the North American dates via Twitter after the fourth episode of her television show, Ke$ha: My Crazy Beautiful Life, aired on May 16, 2013. The tickets went on sale to the general public on May 17, 2013. Leading up to the tour, Ke$ha has been using the website Mobio Insider to connect with her fans and give them details about the tour. Ke$ha promoted the tour mainly through her Twitter and Facebook accounts. Aside from the social media promotion, Ke$ha has also promoted the tour through the application, Blippar. When scanning Ke$ha's symbol, fans could access many special features including the chance to win tickets to any of the dates.

On June 21, 2013, the television network, E!, announced that the network would broadcast a show from one of the co-headlining dates Ke$ha was on with Pitbull. The show would be broadcast as a part of E!'s Inside Track Summer Concert Series. The series is a collaboration with Live Nation. The network filmed the show in Detroit, Michigan at The Palace of Auburn Hills on June 7, 2013. The recording was aired as the first installment of the series on June 21, 2013. To promote the broadcasting, E! interviewed Ke$ha an hour before the show at The Palace of Auburn Hills. In the interview, Ke$ha conversed with the interviewer about her favorite and least favorite parts of the tour, costumes she wears for the tour, and her golden tooth that she has from an accident at a bar. E! also interviewed Ke$ha's stage manager, Justin De Meulenaere, before the show. Meulenaere, who is also known as "Boot", is most known for his work with Ke$ha on her previous concert tour, the Get $leazy Tour.

The setlist varied from show to show but here is a list of songs that Ke$ha performed during this tour. 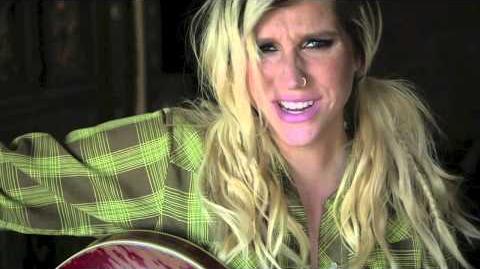 Retrieved from "https://kesha.fandom.com/wiki/North_American_Tour_2013?oldid=22030"
Community content is available under CC-BY-SA unless otherwise noted.