Rising Star was a reality television singing competition which aired on ABC and premiered on June 22, 2014. It featured aspiring singers competing for a winning title. The program format combined the internet, smartphones, and television, and was filmed live in Los Angeles. Kesha was a judge for the first and only season, alongside Ludacris and Brad Paisley. The show was hosted by Josh Groban, and Jesse Kinch was declared the first and only winner of the show. 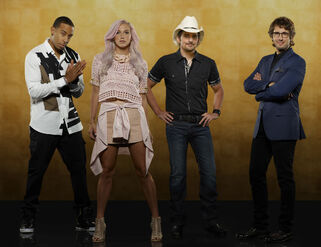 Retrieved from "https://kesha.fandom.com/wiki/Rising_Star?oldid=21933"
Community content is available under CC-BY-SA unless otherwise noted.